"Carnegie Arts Center is a fine arts facility committed to offering persons of all ages opportunities for cultural expression and enjoyment of the visual, performing, and literary arts."

The Carnegie Arts Center is a non-profit organization supported by donations, grants, memberships and fundraising.  We are located in Alliance, NE.  Alliance is a rural town in the heart of the Nebraska Panhandle with a population of roughly 8,500 citizens.  Carnegie serves Alliance and surrounding communities by providing opportunities for cultural expression and exposure to the visual, performing, and literary arts. When the doors opened at the Arts Center in 1993 it was the goal of the founders and the participating members to offer artists a place to professionally show their work. Another goal was to offer community members and visitors enjoyable and educational fine arts experiences. The third goal was to provide area children with opportunities for artistic development and expression. Finally, their fourth goal was to rescue an impressive and historic building from decay and ruin.
Carnegie Arts Center's story is a story of success! Today, Carnegie displays nineteen rotating exhibits a year in our three galleries. These Galleries host artists from different states and cultural backgrounds.  All forms of media are represented here. Our visitors gain exposure to artworks that are diverse in concept as well as content. Annually, Carnegie hosts fund raising events, humanities events, exhibit tours, receptions for artists, and an expansive educational outreach program.  In addition, we hold numerous workshops for youth, which provide comprehensive techniques taught in a fun and safe environment.  Our Studio Gallery showcases local artists as well as provides a comfortable and accommodating space available to the public for rent.  Many take advantage this opportunity for meetings as well as special gatherings. The opening of the Sculpture Garden in 2000 enabled us to expand opportunities. The Garden features endowed sculpture pieces, a nostalgic Memory Walk created with engraved bricks, and lovely plants and flowers. This space is a perfect setting for the public to rent for outdoor workshops, special events, and musical performances.

Alliance, Nebraska became a city in 1888.  Shortly thereafter, the Alliance Women's Club applied for a $10,000 grant from the Carnegie Fund for a library building.  A lot was purchased at 4th and Niobrara for $2,400 by the City of Alliance.  The library building was completed in 1912 for $9850.

The Public Library moved in 1980, leaving the building forlorn and deteriorating.  It was purchased by the Carnegie Arts Center on June 4, 1987 from the City of Alliance for $24,000 on a 10 year contact.  Extensive renovation was completed at a cost of $228,000.  A grand opening was held March 27, 1993.  The fine arts were extended to outdoors the summer of 1999 when the Carnegie Sculpture Garden opened. 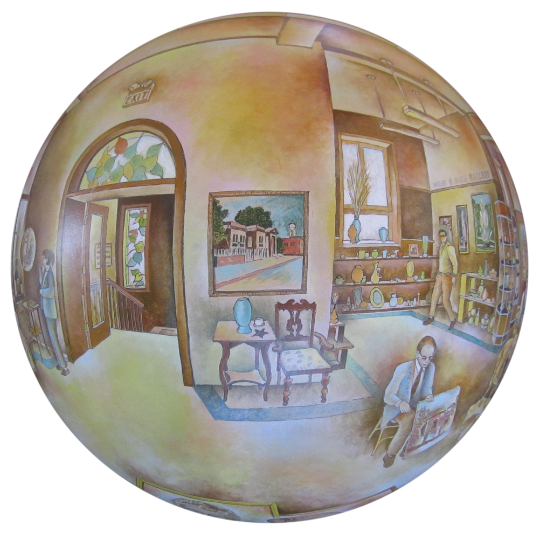 The artist is Dick Termes who is an internationally acclaimed artist whose work has been recognized from San Francisco to Paris, France, from New York to Japan and his one of a kind spherical paintings have been published in books all over the world. Recently, Termes’ piece titled “The Big Bang” was featured on the cover of France’s publication of Une Belle Histoire du Temps which means A Brief History of Time, by Stephen Hawking.

Unlike any other painter; Termes paints on spheres which, when completed, are known as Termespheres®. Each Termesphere® is a revolving three-dimensional space/time exploration of an entirely closed universe, meaning that what you see, rotating in front of you, is one complete world or environment.